Freezing and storage of semen is available for men with medical indications. These include patients who face chemotherapy, radiation treatment or high­risk environmental exposure.

Patients desiring this procedure will have an initial semen analysis to determine the suitability of the sample for freezing. The amount of semen to be stored is up to the individual. However, based on the initial analysis a recommendation will be made by the medical provider and Southwest Fertility Center laboratory staff. There is no guarantee that conception will take place using cryopreserved sperm.

Inseminations may be performed at Southwest Fertility Center, Ltd. or shipped directly to another facility of the patient’s choice. When it is time to use the cryopreserved sample a written request signed by the healthcare provider or the patient’s legally authorized representative is needed in order to ship and/or release the samples. 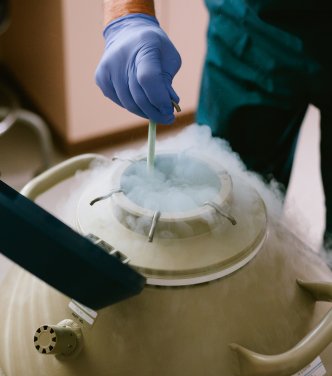 Cryopreservation or freezing of human sperm has occurred for more than 20 years. It has proven to be a safe and effective sperm storage method. Southwest Fertility Center, Ltd. specializes in both the freezing and storage of patient sperm samples.

A variety of special services are provided which are designed to assist patients with male factor infertility problems. Men facing sterility due to illness or environmental factors may have their sperm cryopreserved for future use.

Conditions in which intrauterine insemination with washed sperm is indicated include, but are not limited to: women with poor mid-cycle cervical mucus; men with low sperm count; couples with immunologic (antibody related) problems; unexplained infertility; women with mild endometriosis; and women with moderate to severe endometriosis following medical and/or surgical treatment. The overall success rate with intrauterine insemination varies and is dependent on the cause of infertility.

When a woman is ready to undergo an intrauterine insemination, the husband or partner collects a sperm sample by masturbation. Men can collect the specimen in a private room at Southwest Fertility Center, Ltd. or.at home. If the specimen is collected at home, it must arrive at our office within 1 hour of collection. Further instructions will be given if home collection is performed. Once the specimen is in the lab the sperm is washed free of seminal fluid. The sperm is placed in a medium that provides an agreeable environment for the sperm, often increasing their motility and purposeful movement. The washed sperm are then gently centrifuged to achieve maximum concentration.

Once washed and concentrated, the sperm are ready for insemination. Since the washing removes most of the seminal fluid, which can cause severe cramping in women, it is possible to place the sperm directly into the uterine cavity. The procedure is done at Southwest Fertility Center, Ltd. Washing the sperm and performing an intrauterine insemination maximizes the availability of effective sperm at the site of fertilization.

A woman may experience slight cramping, either during the procedure or for one to two hours after. The medical provider must be notified if severe, unbearable cramping develops or she has a fever of over 100.4° F within 24 hours following the procedure. A potential risk of this procedure is pelvic infection, which occurs in less than one half of one percent of cases.

Intrauterine insemination , when used with effective sperm washing and precise timing of ovulation or with an ovulation induction treatment, results in an increase in the success of infertility treatment.

Patients choosing therapeutic inseminations with donor sperm will generally have intrauterine inseminations performed with the specific procedure to be determined by her medical provider. Inseminations are carefully timed to coincide with ovulation to maximize the possibilities of conception.

A general concern of women entering a therapeutic donor insemination program is the donor’s physical and health characteristics as well as background information. A donor profile, which contains basic background and physical characteristics are immediately available for recipients to view at the time of donor selection. In addition, detailed health history, as well as a three-generation family history, is also available upon request. All sperm specimens used have been frozen and are quarantined for at least 6 months to allow thorough screening for sexually transmitted diseases. All specimens out of quarantine have been found to be negative for HIV, Hepatitis Band C, Syphilis, Cytomegalovirus, Gonorrhea, and Chlamydia. When indicated by ethnic origin, genetic testing for Tay-Sachs and Sickle Cell Anemia is performed. All sperm donors that produced specimens after January 2004 have been screened for Cystic Fibrosis.

What Our Patients Say

Read about some of our success stories and how we’ve helped past patients.

We are very happy to announce that we are now offering more competitive and affordable pricing for our patients. Click here to see what is included.

For more information about our fertility treatments and financing, give us a call today.

What Makes Us Unique?